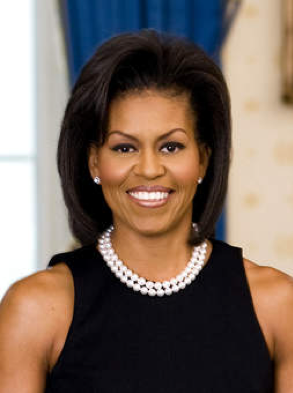 Here are some dating tips from Michelle Obama and me.  I’ve integrated her dating advice and a few of her dating experiences to illustrate some of my dating tips:

“He was trying to sort of show all his sides. So, we went to the Art Institute in Chicago. We walked along Michigan Avenue and talked. And then we went to see ‘Do the Right Thing.’ So, I saw that he was down,” Michelle Obama said. “I knew that I liked him a lot. He was cute and he was funny and he was charming, without, you know, being arrogant. Just a good guy.”

My Point: A guy who is husband material will be thoughtful on your dates. Often he will plan something special or will take your somewhere that will provoke conversation and allow him to really get to know you better. He will invest time and energy in you because you are special to him and he is in it for the long haul.

Michelle Obama admitted she had preconceived notions about her biracial, Hawaii-bred husband, but she said that once she got to know him, all were proved wrong.

“I was wrong. Like many people who make assumptions about — whether it’s Barack or the person in another city or down the street — we do that as people in this country. We label. We put people in boxes. And most of the time we’re wrong,” she said. “And it’s really the experience that you have to have with someone, the conversation, the connection. And I was able to do that with Barack, and I fell in love with him.”

My point: In my book, ‘Dating From the Inside Out’ I give many examples of how important it is to get past our limiting beliefs and give new types of people a chance. To date consciously, we need to choose partners based on our unfolding and consistent experience with them.

“Cute ‘s good,” the First Lady tells the new issue Glamour magazine, out November 10. “But cute only lasts for so long, and then it’s, ‘Who are you as a person?'”

According to Michelle, women shouldn’t be concerned with the “bankbook” or “the title,” but instead focus on the heart and soul of the person they’re interested in.

My point: Looks will fade and one’s status can change (look at this recession) but character tends to be stable across conditions. Don’t just look at how someone impresses you while he is courting you. Look at who he is in the world and how he treats everyone else in his life when you aren’t supposed to be looking.

My point: Ultimately only you can only make yourself happy and realistically, no man will make you feel good all the time. Having said this (I’m not sure what Michelle meant) and it is important to choose a partner with whom you normally do feel good. This usually means that you can be yourself with that person and vice versa. It often signals a supportive, fun relationship where you enjoy each other’s company. After all, if you are spending a lifetime together, you’d better enjoy each other’s company a lot, right? And usually, a good mate really supports your dreams and values too. All of these things make you feel understood, seen and happy.

Michelle and Obama had been dating for a couple of years, and she was tired of his debates about whether marriage still meant anything as an institution. So when Obama launched into one of those discussions again over dinner she lectured him on the need to get serious in their relationship. When dessert came on the plate was a box with an engagement ring. “He said, ‘That kind of shuts you up, doesn’t it?’ ”

My point: Although the timetable might differ between partners, ultimately the right guy will commit to you. I like that Michelle spoke up about what she wanted in the relationship which shows that she could be herself and speak her mind. Obama then teased her right back. It is rumored that theirs is a marriage of equals and that they make decisions together. Although partners will not always agree on things, they ultimately decide to commit fully to their relationship despite outside challenges and they join forces to create a life together.

My Best in Love,
Paulette

Dr. Paulette Kouffman Sherman is a Licensed Psychologist with a concentration in Family Therapy, a specialty in romantic relationships and is a certified life coach and dating coach. She’s been a psychotherapist for 20 years and has worked with many age groups and issues in settings including group and private practice, hospitals, nursing homes, partial programs, universities and schools. She has worked with a range of issues including but not limited to anxiety, depression, life transitions, marital issues, divorce, family issues, grief and loss, career issues, self-esteem, perfectionism, stress, work-life balance, illness and decision-making. She has a psychotherapy practice in Manhattan doing individual therapy and couples therapy and does life coaching and dating coaching by phone and Skype. Her coaching specialty is relationship issues. Dr. Sherman loves helping her clients to unblock obstacles to create lives they love.

Dr. Sherman has also been an adjunct professor at two universities, a lecturer at multiple locations including the Learning Annex, is the author of nineteen books and the recipient of fourteen book awards. She was awarded Woman of the Year in Psychology for NY State in 2013 by the National Association of Professional Women. She has been featured as an expert in over 350 media outlets including The Huffington Post, Crain’s New York, The CBS Early Show and the NY Times.

Recognize Abusive Relationships and Move On

What About Reuniting With an Ex?